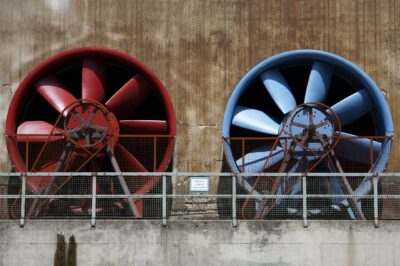 These days more and more of us are converting rooms into bathrooms or toilets, or even turning the cupboard under the stairs into one. This means that very often these rooms have no windows.

No windows = no ventilation. No ventilation = at best, unpleasant odors lingering, and at worst, where you have a shower or bath installed, a build-up of condensation, leading to damp problems. This can cost you a lot of money

So in these rooms, you will want to install an extractor fan to remove the odors and condensation from the air in the room. Quite often you will also want to install one in a room that already has a window so that you don’t need to open it in inclement weather.

The ideal height to place an extractor fan is 1.8m from the ground, and preferably opposite a door or window. This will help the “pull-through” of air. An extractor fan will always work better when there is also an intake of air, so whether this is just leaving the door or window open a crack, it will help to increase the air movement.

You also need to know what type of ventilation fan to install in different situations. An axial fan is suitable when the fan will be ducted straight outside i.e. put in a wall with direct access to the outside. These fans are perfect for those situations. If the fan needs to be ducted over more than about 1m, then you should consider a centrifugal fan, axial fans tend to lose strength when ducted more than this distance.

A third type of fan to consider is called an “inline” fan. This type of ventilation fan is housed outside of the room in question, usually in the loft or ceiling void above. Ducting is attached to each end, one end goes to a hole in the ceiling of the room you want to extract from, with a vent or grille attached to it, and the other end goes to an outside wall or roof, again with a grille or vent attached. These fans have the advantage of being very powerful, and as they are housed outside of the room, the noise levels are pretty low.

Another thing to consider is the size of the fan required. For bathrooms, shower rooms, and toilets, the standard size is 4” (100mm). This measurement refers to the diameter of the spigot (or pipe) which protrudes from the rear of the fan, not the diameter of the fan as you look at the front of it! For kitchens and utility rooms, it is more usual to install a 6” mm (150mm) fan.

You should always consider the extract rate of a fan. These can be displayed in liters per second or meters cubed per hour. For a toilet fan, the minimum rate required would be 6 l/s, but really you should go for something with a rate of 21 l/s. For shower rooms, something above 25 l/s is more suitable. In a utility room, 30 l/s is advisable, and in kitchens 60l/s.

There are 4 main features a fan can have: pull cord, timer, humidistat, and PIR. Pull cord means the fan can be operated by an integral pull cord, common for kitchen and utility room fans. A fan with a timer continues to run for a few minutes after it has been switched off, particularly useful in toilets and bathrooms.

A humidistat fan comes on automatically when the condensation level in the room reaches a certain level and goes off when it drops below that level. This is particularly useful for showers and bathrooms, for rooms where the fan or light might not always be turned on, and for rental situations where you want to be sure the fan is used. A fan with a PIR comes on automatically when someone enters the room.

Now you are armed with all the information you need to buy the right ventilation fan for your home.

Why the Hyper Tough Cordless Jigsaw Is a Must-Have for Any Homeowner?